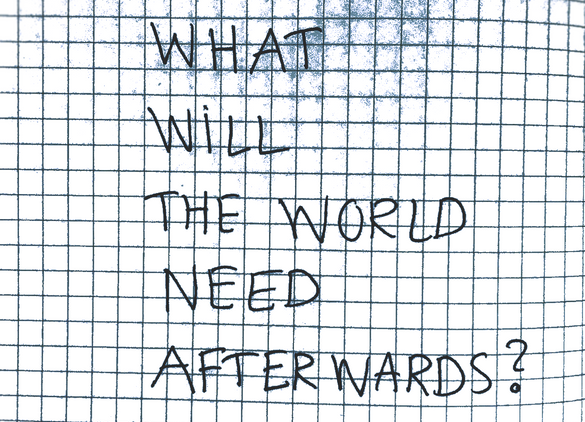 Referring to the previous blog entry, we knew our artistic alignment as a company was to create a gig theatre production, adapted from a literary text that we felt was fundamentally necessary in a post-pandemic world. We wanted to explore, abstractedly and with scenographic fervour, how to represent or manifest a ‘pandemic’ theatrically - what artistic licenses could we take, considering the reality of COVID and the fictionality of our work - how could we interplay between two worlds, actualising a fictional world with real-life ramifications i.e. potential societal/cultural change post-pandemic.
We also needed a text that would help curate a work that utilised the restrictions of social distanced live theatre as part of the dramaturgy - as, to create this world, Marie-Laure Ryan ponders - ‘For the text to construct a world, or fragments of a world, it must offer something to see (or hear, or feel) to the sense of the mind [...] the import of of information provided by real life experience.’ (Gavins & Lahey, 2016) In our gig theatre format, we were lifting a 2D world from a page of dialogue into a 3D model (with a gig scenography) offering sight, sound and taste (a bar was always very important to use as a way of engaging with our audience in a way they were familiar with, e.g. the serving process and taste of beer - it could also give us imaginative avenues of serving drinks)  to construct the actuality. 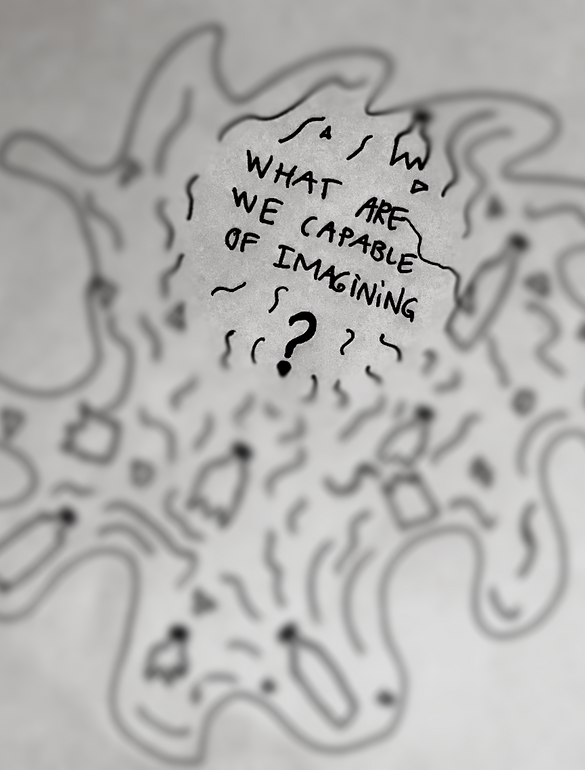 Our first few meetings were informal, in the sense we wanted to have casual conversations to understand each other's zeal for the project - what was it exactly that made us so excited? We utilised the very crucial function of a ZOOM pub, simulating the environment we would usually be in after attending university, i.e. a pub. This led to us conversing about and then devising the dramaturgical questions mentioned in the above paragraph. We tossed around texts such as Stephen King’s ‘The Stand,’ Terry Pratchett and Neil Gaiman’s ‘Good Omens,’ and Octavia E. Butler’s ‘Parable of the Sower’ - all of these works had divergent and fascinating interpretations of what a pandemic or apocalypse could be, e.g. an infectious madness, a computer error or the typical ‘Judgement Day’ religious influenza and the subsequent effects on humanity as a finite species.
In a moment of mirth, brainstorming around forms pandemics could take, we devised a visual of a bartender standing on top of a bar as alcohol flows forth from under and around the structure, smashing bottles and legs to symbolise a devastating flood. As Bachelard said, ‘the imaginary becomes endowed with meaning by the valorization of one who imagines it’ and so from this melodramatic and ridiculous imagery, which we afforded value, a transformative reality was built (Kallenbach, 2018). James, after mentioning a flood, casually brought up the notion of ‘The Waterless Flood,’ a pandemic situated in Margaret Atwood’s MaddAddam trilogy - the specific book he was referring to was the second installment ‘The Year of the Flood.’ In a world of dramatic literary interpretations, the question is why this text in particular? Why is it important right now?

Margaret Atwood’s MaddAddam world questions the nature of humanity and the notion of the post-human. As well as human survivors, we inevitably compared to ‘Crakers’ - a new humanoid species representing a hopeful idea of a post-human world. Our destructive ideologies, economic greed, cooperative abuse and mistreatment of our planet and all other species do not apply as they are as innocent as we believe humans once were. This brings into question - what is important to humans, if not each other or our world? How can something so devastating reset the nature of our existence - what are the things that can help us rebuild into something beautiful without destroying our world? Atwood says herself in ‘The Year of the Flood’ - ‘we must be a beacon of hope, because if you tell people there’s nothing they can do, they will do worse than nothing’ (Atwood, 2009); therefore, our aim became to stage the first gig after the end of the world, making an adaptation of ‘After the Flood’.

2. Kallenbach, ‘The Theatre of Imagination: A Cultural History of Imagination in the Mind and on the Stage,’ Palgrave MacMillan, Denmark, 2018