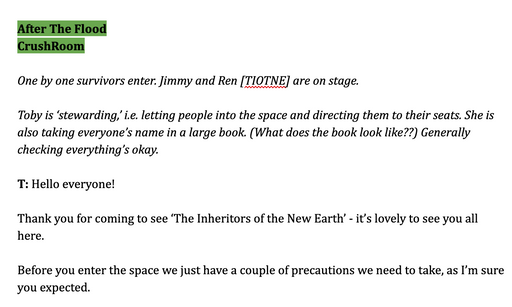 Having previously worked together on an adaptation of Hedda Gabbler, Manda and Octavia knew each other’s presence in a work space, how they effectively communicated (gesturally, verbally, through drawings etc), their personal styles and interests as writers, directors and performers and their preference in working hours. However, many new aspects had come into play - R&D occurring over ZOOM, generating text together that was to be written rather than verbally composed and working with a much larger team - how would our collective directorship of this new company be established? Linked by our determined dramaturgical questions and ideal aesthetic - we each devised a preliminary script based on our independent readings - the links to these two iterations can be found here: …. This exercise allowed us to decipher and acclimate to each other’s writing styles and develop flexibility between our registers. From the scripts we discovered that Octavia’s style was influenced by vernacular and stream-of-consciousness writers such as Virginia Woolf and Oscar Wilde (‘... consciousness, then, does not appear to itself as chopped up in bits [...] it is nothing joined; it flows’ - Stevenson, 1992) as well as from experience as the frontwoman of rock bands and particular artistic styles of audience interaction from people like Freddie Mercury, Robert Plant and Serj Tankien. Contrarily, Manda emphasised the vitality of audience interaction, inspired by artists such as Gemma Paintin and and PunchDrunk, dissecting scenes from the text to see how they could be manipulated into interactive questions that offer a ‘different understanding of [...] element(s), [... that] can change the interpretation of the world as a whole.’ (Ekman & Taylor, 2016.) Thereby, we had a foundation to build off from these initial drafts - finding a compatible style meant a combination of Octavia’s musical oration and free-flowing sociolect and Manda’s directorial approach to the material that was both original and fruitful.

Upon choosing the texts,The MaddAddam trilogy (though mostly drawing from ‘The Year of the Flood’) the question was how to approach it dramaturgically as we needed to lift the 2D fiction into a 3D reality. James had read the text before; thereby keeping in line with Marie-Laure Ryan’s sensorial approach to world building (as mentioned in blog entry 2) Octavia decided to read the book, delving into the intertextual relationship between two historic art forms - the book and the performance. How could that relationship enliven each other - how could the book itself be present in the performative work, what did the actual tangible object of the book symbolise in this new world? How can the tangibility of the words on the paper allow ‘human beings to rich conceptual models of their own reality and alternative realities:’ how can this evolve the symbiosis between storytelling from the page and creative/dramatic license? We decided that Manda would listen to the story as an audiobook to provide ‘an equally wide range of discourse types.’ As … says, the ‘verbal [...] point of view allow(s) the reader to permeate the textual universe and intrude into this fictional space in a way that is certainly not possible in print.’ (Gavins & Lahey, 2016) Crossing these discourse domains allowed us to personify and envision the characters and world in alternative ways and therefore be able to construct the world for the audience’s perception in a multifaceted and complex methodology. To aid this, we decided that Danny and Sarah, as dramaturgical eyes, would not read the text - thereby they would remain outside of the world until they were formally invited in. This allowed Manda and Octavia to officially take a modicum of ownership and liability for this new world - the construction of which derived from the Margaret Atwood text yet was original in its composition.

Having discovered a way to collaborate over ZOOM, Octavia and Manda would develop the script in ‘writing sessions’ usually lasting about 3-4 hours. This would mainly involve disseminating the major plot points that would make up our world and transposing them into original material inspired and structured by the gig framework. We would then utilise Danny and Sarah as our outside dramaturgical eyes in what we called ‘feedback sessions.’ This would involve a script read, leaving room for ‘micro-level interactions between individuals which, when taken together, constitute the human experience,’ (Pivisto & Kittman, 2012) through before anatomizing the content based on our dramaturgical questions and interpersonal interaction between characters. These feedback sessions were incredibly useful as, Sarah and Danny having never read the text, we were able to observe the world non-diegetically as the audience would, before being invited in. This allowed us to develop narratological world context with the ‘audience’ being as important as the central characters, their responses and reactions are as integral as the predetermined plot points, their comprehension of the ‘mental models of who did what to and with whom, when, where, why, and in what fashion in the world’ (Ekman & Taylor, 2016) allows them to experience the world as complete as they are part of it.