Much of our early discussion surrounding the project was designed to zero-in on the social and performance architecture of the ‘live-gig’. As we collaboratively brainstormed what we considered to be the defining characteristics of the ‘gig’ in our collective imagination, common sensations and trends began to emerge. For us, the gig-space came to represent a particular way of making music, in a dual sense: it was both a live way of producing sound together in common space (with its own scents, textures, temperatures and haptic affects (See the video below of the early development on Zoom) with an audience enlivening its production, and simultaneously a methodology for ‘creating’ that music in a dynamic way. This mode of creation seemed to epitomise the qualities we were drawn to in gig as a form, and further seemed to necessitate a diffuse and collaborative sensibility in the generation of content.

The immediate viability of this methodology was obviously undermined early be an enforced isolation and separation. But we were able to pursue the core principles in a few ways. In beginning to think about collaborative, non-hierarchical music making through distance, we were inspired by musicians such as The Postal Service, who wrote and produced their first album through the mail: producer Jimmy Tamborello would create orchestrated tracks and textures, before sending the demos to collaborator Ben Gibbard, who would add his vocals to the mix (REF: https://www.allmusic.com/artist/the-postal-service-mn0000894962/biography).

In terms of our ‘songwriting’ practice, this became an influential model. Manda and Octavia would begin by sending James, Sarah and Danny text that would articulate the tone and narrative focus of a piece; James would then sketch a texture, with some orchestration and a basic harmonic blueprint, sending a recording to the group; Sarah and Danny would subsequently take those recordings and bring melody and lyrics to bear on it, interpreting the text in relation to the music they were given. These recordings could then pass back and forth between the members of the group as additions and edits were made.[1]

We also experimented with methods of ‘graphic scoring’, where each member of the group would receive a joint score that was non-prescriptive, but which could guide their musical contributions in a common direction. Examples of such scores and subsequent exercises can be found below.

Please write/draw/scribble/paint (etc) a score for a 30secs-1min composition/performance involving the natural instruments in your abode. This score can literally take any form you want as long as it makes musical sense and is readable to YOU. We shall be interpreting and performing each others scores so be sure to have a wide range of ‘instruments’ (books, kettle, urself) around you.

Some of the responses:

Despite substantive gestures towards close collaboratively interplay, there was necessarily a somewhat hermetic and private quality to the creation of the music for After the Flood; whether it was James working alone to find the right sound and texture for a piece, Sarah and Danny taking time individually to create lyric material, or even just the simple fact that James was almost entirely in charge of writing and performing the instrumental parts for the pieces.[2] This meant that the music had perhaps a more crisply-composed sense to it than may have been ideal, particularly as this kind of tightly structured writing has more in common with musical theatre composition than it does with the endearing messiness of many collaborative bands.

[1] Some early drafts demonstrating this process can be found below.

[2] The notion of improvisational fluidity and responsiveness when writing and performing music also appeared to partly define the kind of gig-performance we had hoped to emulate. This phenomenon was simply not possible when writing and recording were happening piecemeal, and largely in front of one person’s laptop. 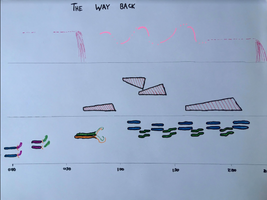 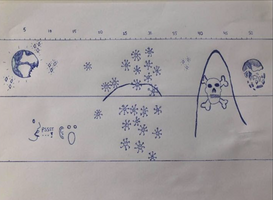 Is It My Fault?

Where music was concerned, the feedback we received from interim sharings often related less to the content and style of the music (although this was occasionally commented upon[1]), and more to dramaturgical considerations such as when the music appeared, who was singing, what the band was doing at each moment, and the optics of playing together in that space. Often this related to the experience of watching a ‘Zoom band’, observations with which we had a tense relationship – we were still committed to the fruition of this piece in a live space. Much of the feedback thus assisted us in our integration of music into the structure and dramaturgy of the piece, but left us slightly in flux when it came to the style and tone of the music.

The stylistic inspiration that each of us had brought forward throughout term 3 could hardly have been more diverse: pre-existing gig-theatre pieces such as Ghost Quartet (2014) were floated early, as was lively indie-rock, singer-songwriter balladeering, and even experimental drone metal such as ‘Sunn O)))’. Each of these seemed to possess qualities of the ‘gig’ as we imagined it. Due to the slower way that we were working – with each of us having time alone to find our own vision before exposing that to outside influence – it was a very gradual process finding a core sound for the show; in some ways, this did not fully cohere until our eventual entry into a rehearsal room.

Below are some examples of the diversity of material with which we experimented throughout the early process. They include noise-music, folk songs, punk rock, orchestral rock, and even some gestures towards synth music!

Once we moved into a rehearsal room, the composition process changed sharply and radically. The simplest and most immediate effect of this was increased efficiency. Suddenly, when ideas could be demonstrated instantly and through a variety of methods (demos, piano, collective singing, guitar), the rapidity with which we could trade impressions and contributions increased exponentially. Two of the songs which appeared in the final iteration of the show were written all but entirely within the narrow window of time we had at St Peter’s, a pace which would not have been possible when working virtually.

another useful result of occupying a physical space was that our capacity to include pieces that were not ‘songs’ as such, but rather textural works and soundscapes that were not metrical.[2] Examples of this include our opening drone piece (improvised by Octavia and James in performance), a soundscape which underscored the ‘pandemic monologue’ (include link to text?), and Octavia’s final acoustic ballad. Each of these pieces was also composed while at St Peter’s.

[1] For instance, Anna noted in an early session that the music which would eventually become The Flood, seemed ‘equal to the gravity of the themes discussed in the novel’; this indicated to us both that the musical style was not trivialising or fighting the material we had chosen to adapt, and that the type of live music we were emulating had solid dramatic potential.

[2] Due to the necessity of performing to a backing-track, it was not feasible to write music that did not include a strong beat or pulse, as we would have immediately fallen out of time with the track or one another. Working in physical space gave us this opportunity.