FROM VIRTUAL REHEARSALS TO A PHYSICAL SPACE

Though every member has creative input on both the words and the music; Manda and Octavia primarily focus on the literary and dramaturgical side of things whereas James, Sarah and Danny are our core composers.

Now that CrushRoom can finally rehearse, perform and enjoy general silliness in a physical space, the orchestration of ‘After the Flood’ has become much more dynamic and emphatic. The months of work and material we produced during lockdown has  served us well; all the components have come together in something fresh, intoxicating and very special.

Upon entering the physical space, the roles within the company became defined. Manda is an excellent director, experimenting and shaping the space, using the performers' bodies as architecture to enhance the potential of a simple black box while advocating taking risks.

Entering a physical space in the time of an actual pandemic means that we continue working with certain restrictions ...

Of course we had to continue to develop the work whilst adhering to social distancing guidelines - playing with these limitations has become a fun way to challenge the way we had previously worked as creatives.

The ‘After the Flood’ scratch night is on at Camden People’s Theatre on 7th September 2020. 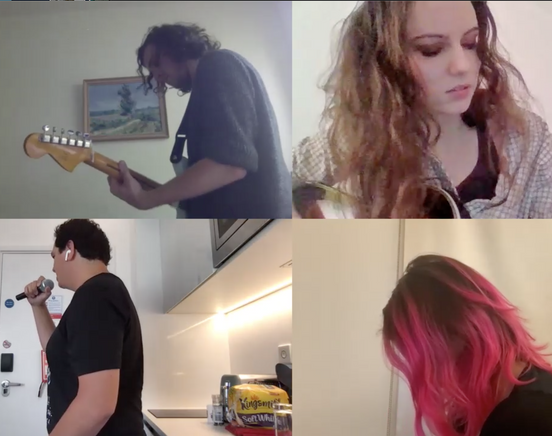 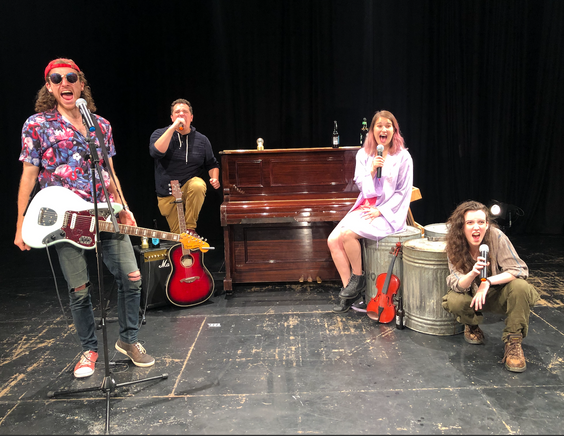 Our emergence into the theatre scene was one of immense experimentation and optimism!

Beginning the R&D and rehearsal process over ZOOM was challenging. Though our roles as company members are fluid, establishing each member’s criteria in this particular project meant that, despite the isolation, we were able to continue working at some pace. Creating rules of how to use the virtual rehearsal space resulted in a very productive way of working while utilizing our time effictively, at and away from the computer screen.
In practice, it meant that each company member would always enter the virtual rehearsals space with pre-prepared material to share, which was based on tasks set in the previous zoom-session.

Manda and Octavia frequently had ‘writing sessions’ where the script developed in accordance with their readings and new originative decisions. These new advancements would then be pitched to the group and the collective feedback would further and enhance the script format.
In these rehearsals, as well as read-throughs, Manda would often direct character workshops and brainstorming games to take us into a communal space where our characters could blossom.

The musical composition took a number of interesting forms. James began experimenting with different compositional formats such as graphic scoring, or ‘in-the-round’ composition (in which one track would be sent on to another company member to layer over and so forth). Before finding our ‘sound,’ doing silly compositional projects such as percussive tracks consisting of bodily noises (cough and sneezes etc.), meant we could see the scale and potential of the ZOOM framework.